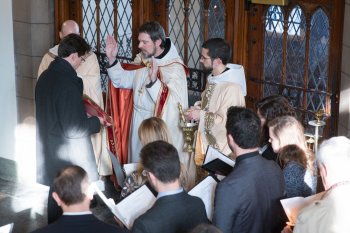 Though not widely celebrated today in the American Church, the feast of Candlemas is a longstanding part of the Church’s rich liturgical tradition. Candlemas, or the Presentation of the Lord, occurs 40 days after Christmas day and commemorates Mary’s visitation to the temple in Jerusalem (recounted in chapter 2 of Luke’s Gospel) in fulfillment of the Mosaic law’s prescriptions for new mothers and firstborn children. This winter the Lumen Christi Institute partnered with Calvert House Catholic Center to host a Mass for Candlemas and the symposium “Sacred Music in Context and Practice.”

The Mass and symposium honored the memory of Fr. Willard Jabusch (1930 – 2018), former chaplain of Calvert House and priest of the Archdiocese of Chicago.

“Fr. Jabusch help initiate the formation of the Lumen Christi Institute during his tenure as chaplain when he asked Catholic scholars to figure out how the Church could ‘do something intellectual’ on campus and present the Catholic tradition of faith and culture in its full integrity,” Levergood said. “His consistent support of the Lumen Christi Institute was essential to its existence and early success.”

Fr. Peter Funk, OSB—a graduate of the University of Chicago and prior of Bridgeport’s Monastery of the Holy Cross—led a chanted liturgical procession from the atrium of Swift Hall, home of the university’s Divinity School, into nearby Bond Chapel, where he celebrated Mass. Candles were lit for the procession and the Mass; this tradition originated in the early Church on account of Simeon’s proclamation during the presentation in the temple that the newborn Jesus would be “a light to reveal [God] to the nations” (Lk 2:32).

The procession and Mass were chanted by Schola Antiqua of Chicago, a professional vocal ensemble dedicated to western liturgical chant and polyphonic music before the year 1600 and, since 2008, artists-in-residence of the Lumen Christi Institute.

The symposium followed a post-Mass breakfast in Swift Hall’s Common Room and drew 80 audience members to hear the thoughts of scholars and practitioners of sacred music. Michael Anderson, Associate Professor of Musicology at the University of Rochester’s Eastman School of Music and director of Schola Antiqua, introduced the speakers and moderated the discussion. First to speak was Margot Fassler, the Keough-Hesburgh Director of the Program of Sacred Music and Professor of Musicology and Ethnomusicology at the University of Notre Dame. Fassler displayed images of medieval celebrations of Candlemas and explained the historical roots and iconography of the feast.

Next to speak was Robert Kendrick, the William Colvin Professor in Music, Romance Languages and Literatures, and the College at the University of Chicago. Kendrick discussed devotional meanings of the feast and explained the chants sung by Schola Antiqua during the Mass that morning.

Peter Jeffery, the Michael P. Grace Chair in Medieval Studies and Professor of Musicology and Ethnomusicology at the University of Notre Dame, spoke about how Notre Dame’s sacred music program prepares its students for lives in ministry in light of the Church’s history of sacred music.

Finally, Fr. Funk discussed the role of sacred music in modern practice from his monastic perspective and his experience of the sacred through music.

Video, audio, and photos of the symposium are available at the event webpage.

Fr. Peter Funk, OSB, is the Prior of the Monastery of the Holy Cross, a contemplative Benedictine monastery in the South Side neighborhood of Bridgeport. Fr. Peter received his B.A. in music from the University of Chicago. After graduating, he was a choral conductor at St. Thomas the Apostle parish and the University of Chicago. He entered monastic life in 1997. Fr. Peter received a Master’s degree in Theology at St. John’s School of Theology in Collegeville, Minnesota, where he majored in Scripture. In 2012, he helped to found the choir Schola Laudis, whose mission is to reintroduce the Catholic tradition of polyphony at the monastery's celebration of Vespers. Fr. Peter has composed numerous motets and four a cappella settings of the Mass.

Michael Alan Anderson is Associate Professor of Musicology at the Eastman School of Music, University of Rochester. He specializes in a wide range of issues related to sacred music from the fourteenth through the sixteenth century, with emphasis on lay devotion and saints. He is the author of the book St. Anne in Renaissance Music: Devotion and Politics (Cambridge University Press, 2014). Anderson is a two-time winner of ASCAP’s Deems Taylor Award for outstanding writing about music, for articles published in 2011 (Early Music History) and in 2013 (Journal of the American Musicological Society). In 2008, Anderson was named artistic director of Schola Antiqua, which he co-founded in 2000.

Schola Antiqua, Artists-in-Residence at the Lumen Christi Institute since 2008, is a professional vocal ensemble dedicated to western liturgical chant and polyphonic music before the year 1600. The ensemble is the 2012 winner of the Noah Greenberg Award, given by the American Musicological Society for outstanding contributions to historical performing practice.

There are many ways you can support the Lumen Christi Institute.

Help us spread the light of Christ

Thanks for signing up!